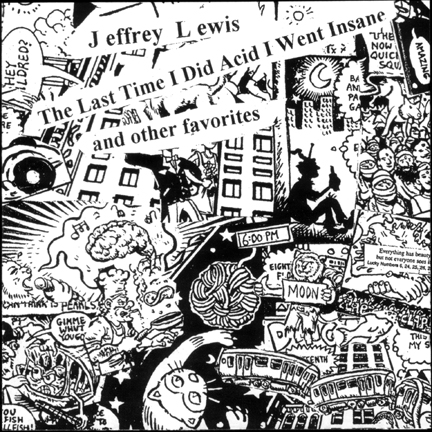 Or downloadable for $8 at jeffreylewis.bandcamp.com

10 song CD released worldwide on Rough Trade records, comprised of six tracks from the “Indie-Rock Fortune Cookie” cassette (including the two Jack-written tracks), three Jeff tracks from the “The Only Time I Feel Right Is When I’m Drawing Comic Books” cassette (version three), and one track from the unreleased Austin recordings.
(first released Sept 3, 2001)

“Jeffrey Lewis: ‘The Last Time I Did Acid I Went Insane’ – Best Indie Album of 2002; like his drawings, his music is witty, animated and true.” – New York Daily News

“Bizarre but brilliant… slugging it out to be New Rock capital of the universe, Jeffrey Lewis could well be [New York’s] ace in the hole.”- Uncut

“Go and witness the genius of Jeffrey Lewis yourself.”- The Stereo Effect

“He claws through the bullshit and pretense ingrained in society. [Jeffrey Lewis’ work] …should be cherished.”- TimeOut London

“[One] of the city’s most adventurous lyricists… the world he conjures in song and sketch can seem limitless.”- TimeOut New York

“Jeffrey Lewis isn’t simply a singer, but a creative comic mastermind… brilliant… a staggering work of… genius.” – (9 stars of 10) Addicted to Sound

“This is a collection of the fine songwriting talent of Jeffrey Lewis. There are stories of almost love, drug fuelled madness, streams of consciousness, and comforting words. All of these are told with a rare wit and humour. There are songs tracing the path from singledom (‘The East River’), through missed opportunity (The Chelsea Hotel Oral Sex Song) and gleefully rubbing it in to the ex (‘Another Girl’). Alongside these are cautionary tales like ‘The Last Time I Did Acid I Went Insane’ and humorous takes on the world as a whole (‘Life’). ‘The Chelsea Hotel Oral Sex Song’ deserves special attention here. It is a tale of a brief meeting between Jeffrey and an unknown woman, a conversation about oral sex, Leonard Cohen and the aforementioned hotel, which expands to a funny and touchingly comforting conceit that Jeffrey himself only half believes. It has an attention to silly little detail and an honesty that is superbly told and beautifully accompanied.” – (4 stars of 5)
Indigo Flow