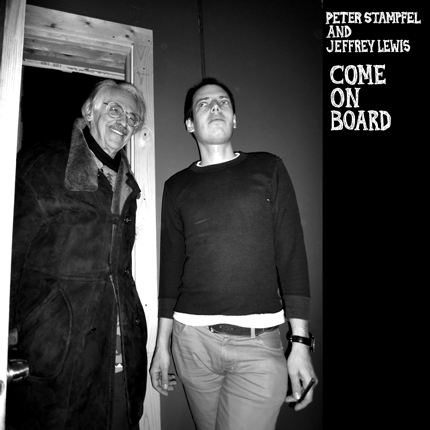 13-song album featuring the all-star Jeffrey Lewis/Peter Stampfel band of Anders Griffen, John Kessel, and Spencer Chakedis! Born in 1938 and recording since 1963, Peter Stampfel is a living legend of NYC folk madness, an original Holy Modal Rounder, an early member of the Fugs, and in more recent decades a musical collaborator with Gary Lucas, Yo La Tengo and many others… Jeffrey has been working with Peter since Peter’s musical contributions to the 2005 “City & Eastern Songs” sessions, but “Come on Board” is their first full-length collaboration.

Entirely recorded and mixed at Brooklyn’s Emandee Studios on December 21 & 22, 2010 – the darkest 36 hours in 370 years (due to a rare combination of solstice and eclipse).

“Come On Board becomes not just a set of excellent (anti-)folk songs, but a series of wonderful moments. Hearing Lewis inadvertently chuckle at Stampfel’s over-exuberant background vocals on ’20,000 Leagues Under The Sea’, the back-and-forth exchanges on ‘He’s Been Everywhere’ or hearing Stampfel exclaim his love over and over in the aptly-titled ‘Love Love Love Love’ are the kinds of things that stick in the mind and make you want to listen to them again and again. The upshot of all this is that Come On Board isn’t just the most fun an album’s offered this year, but it’s simply one of the best listening experiences of the year so far.” – For Folk’s Sake (Full review here)

“Stampfel will be 73 this year, hence perhaps his get-it-while-you-can production surge. Not only are albums tumbling out of him, he’s gigging like crazy and sitting in with one of his many friends whenever he can. In fact, that’s how this keepsake came about–as something to sell on an already scheduled U.K. tour, recorded in two dark days at the winter solstice. The equally hyperactive young Lewis proves an even better fit than his harmonizing daughter Zoë–the Sparrow to his Tuli, only each has more to say. The unrehearsed band make for a discernible improvement over Stampfel’s recent Uncle Gramps and Zoë records and a drastic one over his Worm All-Stars record, as do Lewis’s not-quite-nonsense songs for Jules Verne and Madame Tussaud and his fiddle-fed 10-minute earworm of a strophic closer. Stampfel’s contributions include two of the dreamsongs he writes whenever he wakes up with a melody bouncing around his brain, several welcome remakes of old Antonias, and a lovely, loving throwaway called “Love Love Love.” – GRADE: A-. Robert Christgau, Consumer Guide

“Jeffrey Lewis […] continues to amaze in 10,000 ways… Peter Stampfel [is] a name that should drop some jaws if you’re into important figures in psych-folk history (Stampfel played in The Holy Modal Rounders and The Fugs, among other groups; he even contributed to the liner notes for Harry Smith’s Anthology of Folk Music, for Pete’s sake!).” – Tiny Mix Tapes (Full review here)

“A founding member of the Greenwich Village beatnik/folk outfit the Holy Modal Rounders, Stampfel is steeped in the jargon of the 1960s (how many other musicians reminisce about “my ex-old lady, who was a psychedelic guide”?), yet he and Lewis complement each other wonderfully. Although Lewis’s name has sold the tickets, it’s a gig of equals. […] they are quite a duo, this mismatched but perfectly compatible pair of New Yorkers.” – FOUR STARS (of five) – The Guardian (full live review here)

“…the incredible variety of things on offer made the lengthy set fly by. Although Jeffrey Lewis shows usually feature interesting covers and songs on esoteric subjects… this was entirely on another level. Do you laugh, cry, or simply hang your mouth open in disbelief when confronted with such bizarre wonders? Any of those reactions would have been valid at this show, because it’s probably safe to say that no one in that packed room had ever seen anything quite like it.” – Live Review, Leeds UK, 1-26-11 – Rob Evans Hates Your Band (full review here) 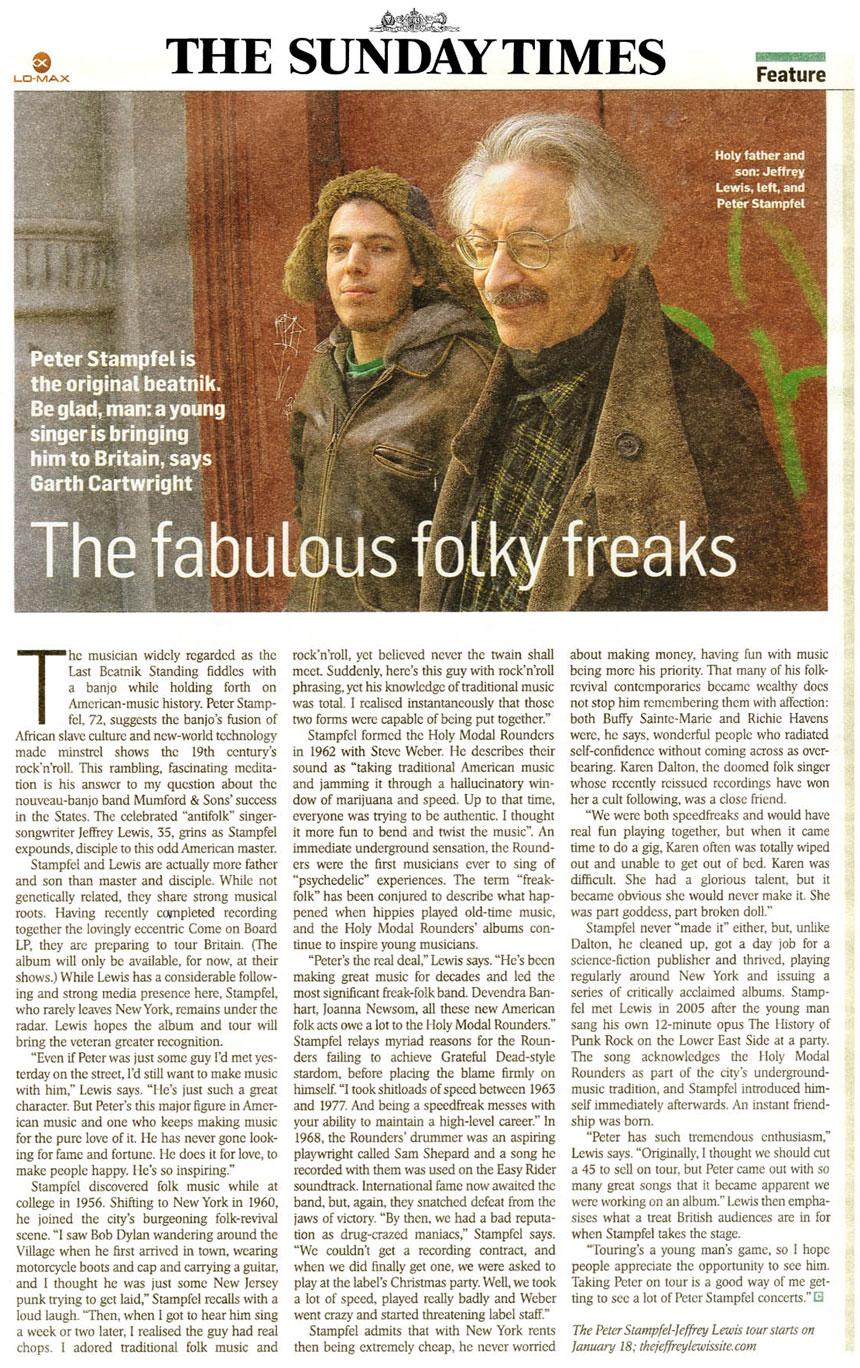