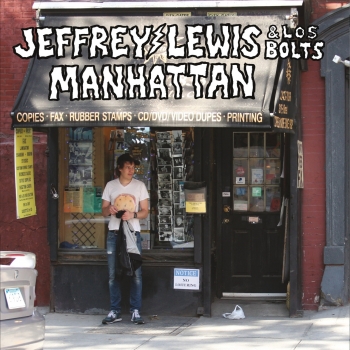 Manhattan is Jeffrey Lewis’s seventh studio album for Rough Trade, and his first since 2011’s A Turn In The Dream-Songs. His band is called “Los Bolts” and includes his regular players Heather Wagner (drums) and bassist Caitlin Gray (Hooray For The Riff-Raff) and contributions from his cohorts The Wave Pictures, Turner Cody, and David Beauchamp. The album’s artwork features Jeff’s illustrations throughout.

Manhattan was mixed by John Agnello (Dinosaur Jr., Phosphorescent, War On Drugs) and recorded by Brian Speaker. The album is both named after and directly inspired by New York City, but is no regionalized curio. Like contemporaries The Mountain Goats or The Decemberists, it’s the very specificity of the details Lewis uses to depict his characters and situations that make his songs so evocative, and so emotionally rich. Lewis is both a lifelong resident and a detached observer of his hometown; but ultimately, it’s a simple treatment of human moments by one of our sharpest songwriting talents.

“Longtime fans of Jeffrey Lewis treat each of his albums like a returning old friend. We know what to expect by now – scratchy, lo-fi punk and croaky anti-folk – yet we also know his lyrical wit still has the capacity to surprise.  […] He wrestles with neighbourhood crackheads, the pressures of settling down and – who else could tackle this? – the stress of having to pay your drummer on support tours. Lewis is unlikely to ever dramatically change; instead his music slowly develops and wizens, as we all do. It’ll be fun growing old with him.” **** – Tim Jonze, The Guardian

“Lewis’s catchiest and finest album…  Pushing 40 now, this second-generation bohemian knows his turf from “Scowling Crackhead Ian,” where the kid who held a knife to his throat in junior high is still befouling St. Marks Place, to “The Pigeon,” which stuffs some 30 choice Yiddishisms—“schnorrer,” “verkakte,” “furshlugginer,” oy gevalt—into a Poe-parodying Delancey Street anti-gentrification kvetch. As promised only a hell of a lot slower, he spends nearly five minutes collecting his thoughts in “It Only Takes a Moment.” But he gets where he’s going just about every time.” (Grade: A) – Robert Christgau, Vice

“One of his strongest outings ever” – SPIN (Overlooked Albums Report)

“Singer/songwriter and underground comic book artist Jeffrey Lewis is known for writing sharp, literate, touching, and often hilarious songs about subjects ranging from acid freakouts to historical events, but Manhattan (his seventh full-length for Rough Trade) focuses on tales relating to his home borough… […] As great as Lewis is at penning punchy, acerbic songs like these, he’s still a master at taking his time to craft a calmly paced narrative, as best exemplified here by the jaw-dropping eight-minute centerpiece ‘Back to Manhattan'” – **** – Paul Simpson, AllMusic