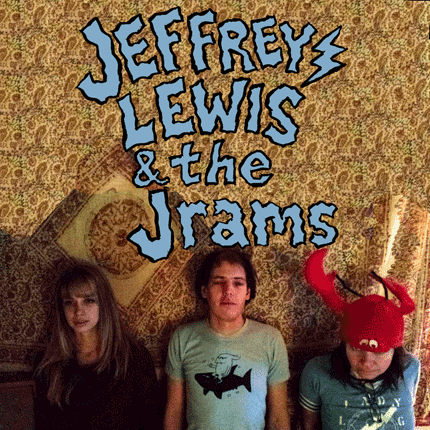 CD is SOLD OUT but the album is available at JeffreyLewis.BandCamp.com

Jeffrey Lewis & The Jrams (self titled)

All six Jrams tracks recorded, mixed and mastered in a single day at Brooklyn’s Emandee Studios, with engineer Mark Ospovat, on Sun Jan 5th 2014; plus four additional Jeffrey solo recordings from other sources.

“I’m finding it harder to keep up with my favorite bands. Either by age 40 I’ve collected too many favorite bands or life is moving too fast for me to stay on top of it. Things happen that never did before – I’ll realize a band I listened to obsessively in 2005 has put out two more LPs since then without me knowing. Or, for example, Jeffrey Lewis put out an exclusive tour CD and I nearly missed the fact of its existence. Actually, it’s available not just at shows but on his website. It’s under the name Jeffrey Lewis & the Jrams, not to be confused with Jeffrey Lewis & the Rain or Jeffrey Lewis and the Junkyard or the Jeffrey Lewis and Peter Stampfel Band or simply Jeffrey Lewis. Nevermind, go ahead and confuse them, they all involve the same person, the Lower East Side folk singer/comic artist/writer of sonnets based on Sonic Youth lyrics named Jeffrey Lewis. Eclecticism is, to an extent, part of his music too – or at least this collection of 10 songs is lovably rag-tag. The CD starts with a lonely pop song that begins with him imagining his own funeral, wanting it to happen while he’s alive and moves into general longing for gatherings of friends and ponderings about his own ability or inability to maintain friendships within today’s social-media, fast-paced world (“You’re Invited”). [One thing I always relate to about Lewis is his ability to articulate the feeling that the world is slipping by you or making you feel like an out-of-touch alien.] The CD ends with a short acoustic track that takes on a traditional folk form more than the rest (“Down to See”). In between those bookends is a song my wife mistook for the Violent Femmes, a spoken poem about Pussy Riot, a spacey daydream called “Nonsense” (“Nonsense rules supreme”; truer words not spoken) and a kind of gutter blues song about the hardships of daily life, like burnt pancakes or the morning newspaper not showing up (“It’s No Good”). His wit and humor, within a Charlie Brown-like “woe is me” persona, is exemplified by the quick-and-easy “Outta Town”, a would-be college-radio hit that seems like a tragic tale of heartbreak — what can he do now that she’s gone – until he reveals that she’s only out of town for the weekend, and has only been gone for a day and a half. The bouncy, almost optimistic pessimism on display there is a hallmark of this collection and Lewis’ overall discography, which is filled with many similar pleasures.” – Erasing Clouds

“In today’s music, a common topic of conversation is authenticity: Are they for real? Were they actually playing? Is this a joke or is it serious? Are these people who they say they are? There are some notable exceptions to this constant skepticism amongst our artistic ranks, and one of them is Jeffrey Lewis. The 38 year old songwriter and comic book artist from the Lower East Side of Manhattan has been producing honest and affecting work for almost twenty years, with character and integrity that both Pete Seeger and Ian McKaye would approve of. This record, Jeffrey Lewis and The Jrams, follows Lewis’ beautiful collaboration with Holy Modal Rounders and Fugs alumnus Peter Stampfel for an album and tour, as well as a pair of touching and bizarre Lou Reed tributes, one of which found Jeff jamming on piano with my band, The Brooklyn What on “Oh, Sweet Nothing.” This was an absolute thrill, as I had sat in the audience in the very same club and watched Jeff play there with Kimya Dawson about ten years ago. The Jrams album, recorded as a tight power trio with Caitlin Grey and Heather Wagner, forgoes some of the folk-punk minimalism of other Jeff albums for a warm, psychedelic garage tone that sometimes recalls The Kinks and The Zombies. Opener “You’re Invited” is a positively dreamy song led by a soft, blankety organ sound. Jeff ponders his own existence: “It sure would be nice to go to my funeral to see who made it/people should have funerals while they can still appreciate it.” These two lines in and of themselves start the record in a thoughtful, pensive manner: why does the artist, or anyone for that matter, have to wait ‘til death to be recognized by their loved ones and admirers? Much of the rest of the record picks up with some true rock n’ roll moments: “Came Here Looking” is nervous post punk song recalling The Feelies and Television, with Jeff doing some fuzzed out guitar heroics. “Painted In A Corner” kicks off with a distorted bass line, the title immediately reminding me of the Raymond Pettibon art for Black Flag’s “Six Pack.” The result is a phased out, paranoid, punk rock assault with a riff that sounds like Minutemen covering The Ventures. Inserted onto the record is a live recording of Jeff performing his poem “What Would Pussy Riot Do?” which inspired this writer to explain “Why I Play Rock n’ Roll?” in a recent essay[…]. He celebrates the ladies of Pussy Riot as “punk rock heroes” and asks “do you want bands who tell you things or bands who sell you things?” He calls out Beck and Best Coast, supposed “indie” artists, for doing corporate tie-ins and urges artists to consider Pussy Riot’s willingness to make a sacrifice for their freedom to be artists, before compromising yours. There are flash-in-the-pans and then there’s Jeffrey Lewis; since he began making records at the dawn of the 21st Century, there have been thousands of bands to reach fame and hit their hard decline. Lewis keeps challenging himself and his audience while maintaining the attitude and integrity of a cool local dude.” – Jamie Frey, Jersey Beat