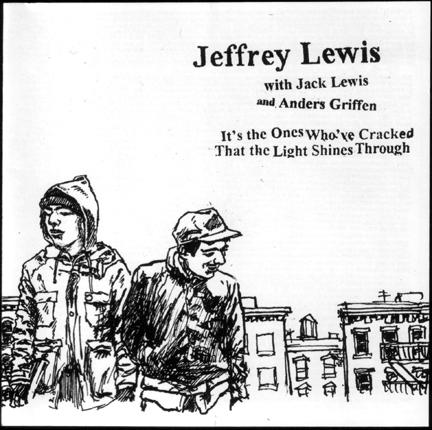 OR Downloadable for $8 at jeffreylewis.bandcamp.com

“At first, Jeffrey Lewis’ songs seem like jokes. His voice sounds nerdy, the lyrics ramble nonsensically and the guitar chords are the most primitive you’ve probably heard since grade-school music camp. But stick with it long enough and the payoff comes in smart and detailed narratives that nail the human condition. Lewis made his debut in 2002 with “The Last Time I Did Acid I Went Insane and Other Favorites.” The latest CD, recorded with his brother Jack, on bass, boasts the equally fetching title above. On both records, Lewis’ primitivist music and surreal lyrics recall ‘60s folk satirists the Fugs and David Peel. In fact, the songwriter sprang from the “anti-folk” movement which recalls those East Village performers. Lewis also has a career as an underground comic-book artist. Like his drawings, his music is witty, animated and true.” – Jim Farber, New York Daily News, August 9, 2002

“There’s no doubt ‘It’s The Ones Who’ve Cracked That The Light Shines Through’ will end up in Best Of 2003 lists everywhere come the end of the year. Because it really is a genuinely superb record – sharp, dry and wry, it should make Lewis (who’s also a comic book writer) famous. And this despite its simple approach to musicianship – mostly it’s just Jeffrey and his guitar. Immediately striking is the wit embedded in the opening number, ‘Back When I Was 4’, you’ll laugh out loud or die trying not to, and from there on in will be bowled over by some acute observations and unusual warmth. He weaves his tales of growing up particularly well, and such yarns can’t help but connect. There are elements of Loudon Wainwright III, Tenacious D and Bright Eyes here, though it’s Lewis’ individualism that’s really the key. Inspired stuff.” – (4 stars of 5) Barfly

“As Bob Dylan proved early in his career, there’s a very fine line between outsider folk and a comedy record. The shaggy dog, talking blues about post-apocalyptic monkeys and farmers’ daughters from Another Side Of may have sunk to the bottom of Dylan’s catalog, but their rambunctious goofiness shines on in Jeffrey Lewis, one of a new generation of New York anti-folksters. On his second full-length for Rough Trade, the 27-year-old cartoonist brings his cracking voice to bear on the pressing issues of the age: rampaging ghouls, towers of turtles and the fact that no, he doesn’t want to do any acid, thank you. The wackiness of Cracked is charming, but the real highlights of the record are songs where Lewis turns his wide-eyed language on more personal matters. “I hope that the art school enjoys your big painting of ruin,” he sighs on “Alphabet.” “We’ve all got good things to do, and it’s good when we do them.” Packed with these strangely perfect bons mots and buoyed by a heroically unhip sense of wonder, Lewis’ lyrics are as tight as his guitar playing is weak. But so what if his musicianship has all the finesse of a dorm-floor sing-along? Lewis specializes in a rambling, autobiographical style that reassures and entertains more than it startles or amazes. It’s good, but not great, and Lewis will likely never quite get around to penning his “Blowin’ In The Wind” or “My Back Pages.” But the stories on Cracked are bright, funny and warm-hearted. Sometimes, that’s more than enough. ” – MAGNET

Friends of the Heros review of “Ones Who’ve Cracked…”

Life in a Bungalow review of “Ones Who’ve Cracked…”

Lost at Sea review of “Ones Who’ve Cracked…”

Popmatters review of “Ones Who’ve Cracked…”

Fingertwitch review of “Ones Who’ve Cracked…”

Playlouder review of “Ones Who’ve Cracked…”

Whisperin and Hollerin review of “Ones Who’ve Cracked…”

DELUSIONS OF ADEQUACY review of “Ones Who’ve Cracked…”

Addicted To Sound review of “Ones Who’ve Cracked…”