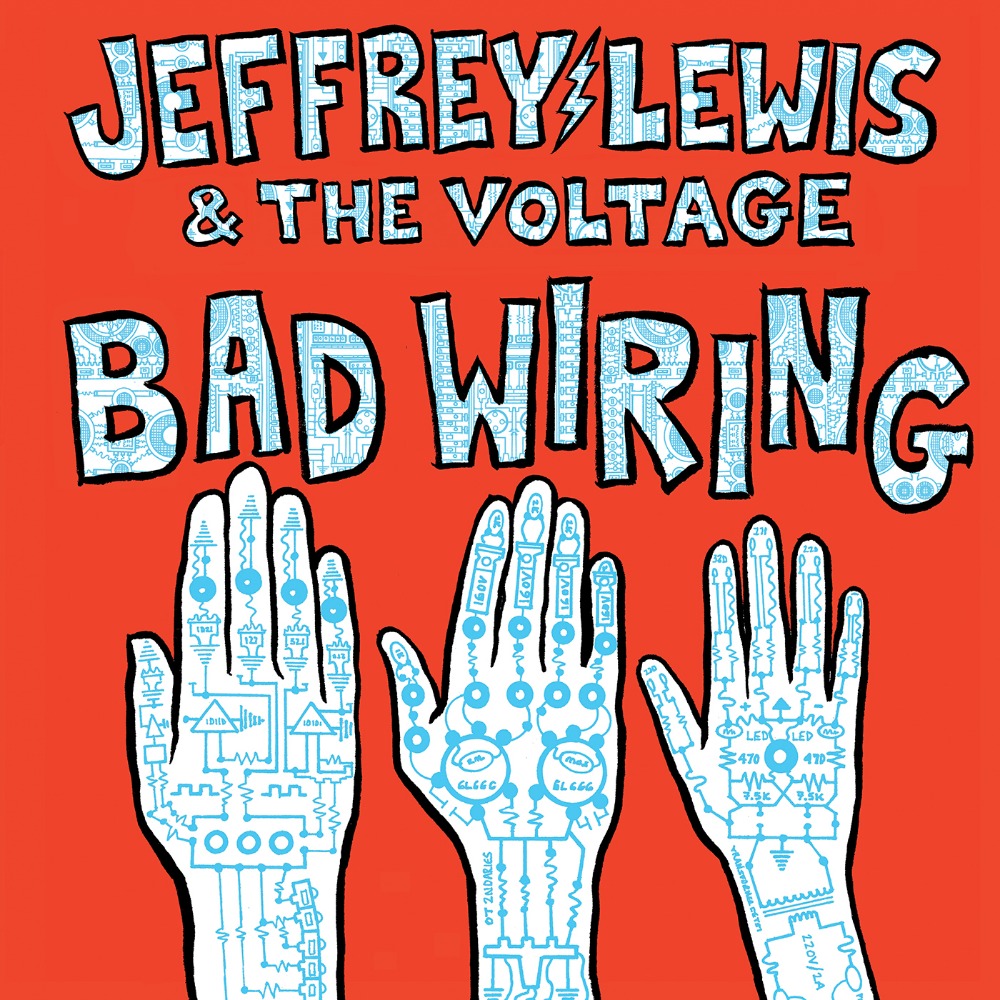 1. Exactly What Nobody Wanted
2. Except For The Fact That It Isn't
3. My Girlfriend Doesn't Worry
4. Depression! Despair!
5. Till Question Marks Are Told
6. LPs
7. Knucklehead/Happy Rain
8. Take It For Granted
9. In Certain Orders
10. Where Is The Machine
11. Dogs Of My Neighborhood
12. Not Supposed To Be Wise

Bad Wiring was recorded and produced in Nashville by Roger Moutenot, the man responsible for producing all of the classic Yo La Tengo albums. Moutenot, who also worked on Lou Reed’s “Magic and Loss” album, and Sleater Kinney’s “Hot Rock” album was definitely the right man to capture these twelve new Lewis songs in the studio. As Lewis explains, “As an experience of working with a producer, it was a dream come true. I obviously worship a number of the records Roger had produced in the past, so I specifically sought him out. The fact that he’s in Nashville was just accidental, we would have traveled to record with him anywhere. Now when people hear we made our album in Nashville, everybody’s like, oh, I guess this is your country album…”

With the endlessly creative musical variety on display from Jeffrey Lewis & The Voltage, and Lewis’s writing as sharp as ever, “Bad Wiring” could be the greatest album of Jeffrey’s 18-year career.

“Bad Wiring finds Lewis and bandmates Mem Pahl and Brent Cole hurrying between melodic garage-punk and raw acoustic grooves to great effect. But it’s his terrific wordplay—sharp, funny, poignant and much more—that really dazzles, from the torrent of anxieties that pour through “My Girlfriend Doesn’t Worry” to his droll adventures in vinyl-digging that power the sublime “LPs.” *******- Rob Hughes, Uncut

“One of the most extraordinary voices in contemporary music returns… for the euphoric and highly addictive Bad Wiring. Immediate, charming and perhaps the best delivery to date from one of the very most singular voices.” – Deluxe Magazine (Albums of the Year)

“Terrific stuff… one of the most consistently enjoyable records Lewis has made in his 18-year career. Confessional, cathartic and full of his trademark charm and quirks… the jittery “Except For The Fact That It Isn’t” has more energy than a nursery school full of kids out of their minds on Skittles.”********– HotPress

“Rocks harder than ever… The “and about our relationship” refrain of “My Girlfriend Doesn’t Worry” will have you replaying the album instantly” [grade A-] – Robert Christgau, Consumer Guide (top albums of the year 2019)

“While his tunes may appear shambolic, feisty and disjointed, they’re much more like three-minute masterpieces than mere doodles…. Lewis is ably supported by Mem Pahl (bass) and Brent Cole (drummer) as they make the fantastic real. And who could ask for more in a song?” – London In Stereo

“Jeffrey Lewis & Los Bolts’ 2016 album ‘Manhattan’ is in my Top 5 albums of all time, so when Jeffrey released his latest venture ‘Bad Wiring’ I was beyond excited, though no matter how much I bigged it up in my head I wasn’t prepared for how gorgeous the new album would be.” – Headaches, UK

“Bad Wiring is an electrifying addition to the Jeffrey Lewis canon, and possibly his best studio album yet.” **** – The Skinny

“Alt-folk garage-rock wisdom… There’s a strong suggestion that this is the best album his written to date and after listening to just a handful of songs you’d be hard-pushed to disagree – you’ll also be left wondering why in the hell Lewis is not better known than he is, this album is filled with unforgettable songs that set his songwriting apart from anything else you’re likely to hear today.” – Folk Radio UK

“Sometimes the first time you hear a band can linger long in the memory; for us that was undeniably the case with Jeffrey Lewis… Jeffrey Lewis’ music was like a gateway drug; it opened up worlds of indie-pop, DIY-punk, anti-folk… Jeffrey Lewis offered a real alternative. …While any review of a Jeffrey Lewis album is likely to focus on his lyricism, and worry not we’ll get to that, what’s really clear on Bad Wiring is just how far Jeffrey’s music has come. Listening to Bad Wiring the metamorphosis is clear, it’s a sprawling collection of musical creativity, from the riotous garage-rock of “LPs“, to the bluesy interlude of “Knucklehead / Happy Rain” and the krautrock influenced “In Certain Orders.” Working with producer Roger Moutenot, Jeffrey and The Voltage have wrung every drop of creativity from these songs… His music career might be old enough to go to University, yet on Bad Wiring it seems as fresh and exciting as ever. While it’s too early to call it his best album to date, we’re looking forward to spending the next eighteen years working that out.” – For The Rabbits

“Eighteen years in he’s not just still releasing records, he’s releasing quite possibly the best record he’s ever made. Bad Wiring, Jeffrey’s collaboration with current backing band The Voltage, feels like a crowning moment, the point where his metamorphosis from lo-fi acoustic folkie into eclectic DIY-superstar was complete, with none of his lyrical impact lost along the way.” (Top 5 Albums of the Year 2019) – For the Rabbits

“Cult New York City indie rocker Jeffrey Lewis has a genius for conversational lyrics about life (“The Last Time I Did Acid I Went Insane,” “You Don’t Have to Be a Scientist to Do Experiments on Your Own Heart,” “Seattle,” etc.) and, more importantly, music nerdery, of which “LPs” off the new Bad Wiring album might be the pinnacle. Lewis has released entire full-lengths devoted to the songs of British anarcho punks Crass and the Fugs’ comedian-poet Tuli Kupferberg, so his cred is impeccable. This may be a minority opinion, but Jeffrey Lewis should be at least as popular as fellow awkward-voiced troubadours the Mountain Goats.” – The Seattle Stranger