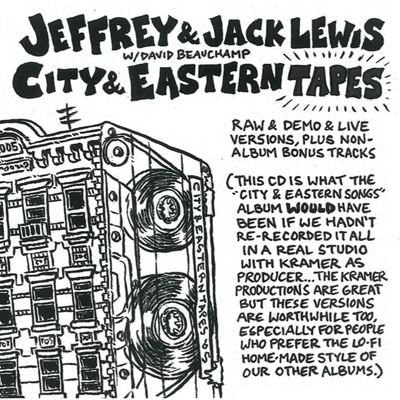 CD is SOLD OUT but the album is available at JeffreyLewis.BandCamp.com

18-song CD compiled in 2008 by Jeffrey Lewis; this is a companion to the 2005 “City & Eastern Songs” album. “City & Eastern TAPES” is 12 tracks of demos and alternate versions plus 6 never-released album out-take songs. These 18 raw versions document Jeffrey & Jack Lewis (with drummer David Beauchamp) in 2004-2005 and what the “City & Eastern Songs” album MIGHT have been if it had been recorded in the same home-made lo-fi style as Jeff’s first two albums, and had the songs for the official album not been re-recorded in a professional studio in 2005 with Kramer as producer. The 12 officially released glossy Kramer productions on “City & Eastern Songs” are great in their own right, but this “Tapes” compilation is a must for fans of Jeff’s earlier lo-fi recordings – plus there’s 6 songs never released on a Jeffrey Lewis album before! (First released July 2008) 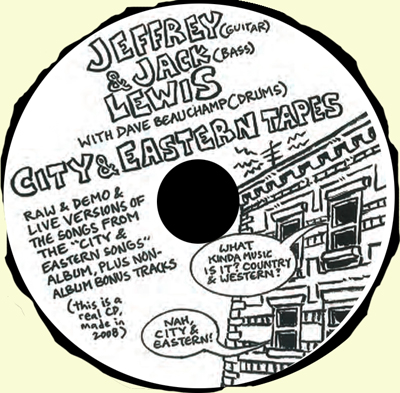