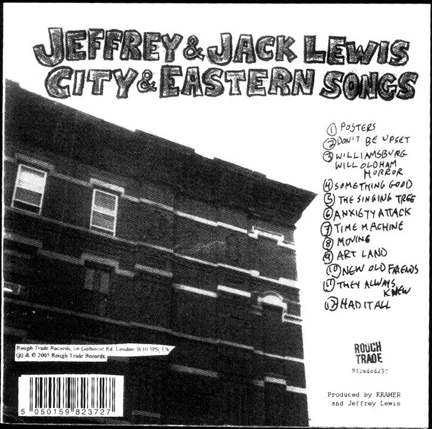 “A more polished effort from the Big Apple’s best-kept secret.  NYC’s never exactly lacked eccentric singer-songwriters, but all, from Lou Reed up to Adam Green, would struggle to out-boho Jeffrey Lewis… The likes of “Time Machine” exhibit Velvets-style fuzz, while the speedfreak ramblings of “Williamsburg Will Oldham Horror” show just what makes this comic-book obsessive so unique… Stick with it young fellow – we’re with you all the way.”– (8 stars of 10) NME 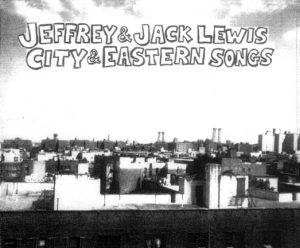 “Rough Trade arguably boasts the most exciting roster of artists [and] fabulously eccentric American indie mavericks… You can add to that list New Yorker Jeffrey Lewis.”  – (4 stars of 5)The Sun

“Jeffrey Lewis is a god, there’s no denying it.”- Drowned in Sound

“No one splits the music community quite like Jeffrey Lewis… Lewis has gradually established himself as the one true jewel in NYC’s underground crown,  his quirky streams of consciousness and acid-fuzzed folk wooing the most blasé and self-conscious of world audiences in an instant… On the evidence of this hugely impressive record it could not be more deserved.” – The Downloader

“…Remarkable offbeat talent… it’s only a matter of time before Lewis becomes an indie hero.” – The Independent

“I can’t stop listening to the album.  Everyone should be made to hear it at least once” – (5 stars of 5)Brig

“For stressed-out, maudlin and anxious twenty-somethings there are few better spokespeople than [Jeffrey Lewis]… chunky punk and skittery electronics border lush backdrops of slide guitar and banjo.  It’s what his intelligent and witty songs have long deserved.” – (4 stars of 6) TimeOut London

“Belle & Sebastian would strangle their worship group leader to be able to come up with something this good.” – (4 stars of 5) Play Louder

“Compared to the flash of the Strokes, Lower East Side boy Jeff is a thrift shop minstrel from the more interesting side of town.  An excellent urban addition to the new American folk of Sufjan Stevens and Devendra Banhart.”  – (4 stars of 5) Daily Mirror

“Critics fling epithets such as ‘the new Dylan’ around too lightly these days.  It devalues the praise that New York anti-folk troubadour Jeffrey Lewis is steadily accruing.  [He] is a cartoonist, raconteur and scathing wit… Recorded by lo-fi legend Kramer, the band setting proves Lewis’s versatility.”  – The Observer

“All the clean lines and drawn-from-life detail of an old master.” – (4 stars of 5) The Guardian

“[Rough Trade] has presented us with the rare pleasure of a record that excels in being both a challenging and a satisfyingly comfortable listen.”– (4 stars of 5) High Voltage

“An occasionally incredible listen… line after line that has you gasping.  Another flawed gem.”  – (4 stars of 5) What’s On

“Jeffrey Lewis provides a lucid intelligence to his songs that is sadly lacking from many songwriters today. […]  Sublime.” – (4 stars of 5) Cemetary Gates

“Jeffrey Lewis is complete genius, and City & Eastern Songs proves that without a doubt.”  – Beat Magazine

“Anyone who has been lucky enough to come across anti-folk exponent Jeffrey Lewis will know his ability to [create] with just the right quantity of wit, lyricism and self-deprecation… [This album] will doubtlessly bring [Lewis] closer to the slippery edge of public recognition than he’s ever been before.” – (4 stars of 5) Oxford Student

“This is an exercise in frantic self-depreciation intertwined with melancholic but dissonant country with the odd rock song thrown in for good measure. In other words: it’s fantastic.  It’s good to finally see Rough Trade, back on track.”  – Subba-Cultcha